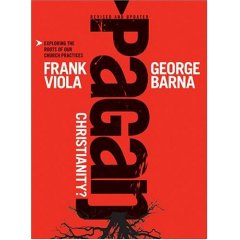 My Prophetic Revelation from Pagan Christianity?.

For though we walk in the flesh, we do not war according to the flesh, for the weapons of our warfare are not of the flesh, but divinely powerful for the destruction of fortresses. (2 Corinthians 10:3-4)

There is no neutral ground in the universe; every square inch, every split second is claimed by God and counter-claimed by Satan. (C.S. Lewis)

Twenty years ago, I was working as a painter for a motel in Iowa. My life, at the time, was anything but a Norman Rockwell portrait of small town happiness. A marital separation. Two confused children. Unhappy parents. Very few friends. No car and little money. Not exactly a victorious Christian life, right?

As I was painting one morning, a divine revelation slapped me across the face. “Satan hates Christians. He and his demon horde want to destroy the Body of Christ. We need to fight.”

My mouth dropped open. I thought, oh Lord, I don’t know anything about spiritual warfare. Teach me how to fight.

I prayed. I fasted. I studied the Bible. I read books. I listened to tapes. It was slow going, but after a while, I realized that I was a member of the “Joshua Generation.” Many prophets and teachers had various revelations about fighting principalities, powers and rulers of darkness. Each confidently proclaimed that cities would soon be changed by the church’s successful spiritual warfare.

And yet, since then, little has changed. The spirit of bondage is still the ruling principality over America’s inner cities. This cruel task master has been unfazed by our spiritual warfare and intercessory prayers. Even the many ministries who have attempted outreaches into the inner cities have settled for small (if any) gains.

So, if we – the church of Jesus Christ – are the so-called “Joshua Generation”, what are we doing wrong? Why have we accomplished so little in America’s inner cities with our spiritual warfare and intercessory prayers?

Until I read Pagan Christianity?, I never asked myself, “What are we doing wrong”. I just assumed that we needed to keep plugging away. You know – more prayers, more fasting, more prophetic declarations, etc.  Same-oh. Same-oh. Ho-hum!

And to be honest, I am sure that Frank Viola and George Barna did not intend Pagan Christianity? to be a spiritual warfare guide. But the light clicked on inside me anyway, and I know that I know: We are warring according to the flesh.

As most prayer warriors know, the number one guideline for spiritual warfare is to get rid of whatever you are fighting against in your own lives first before you begin any spiritual warfare. For example, if you are praying and fighting against a spirit of lust in a neighborhood, you need to repent and get rid of the sin of lust in your own lives first. Spiritual authority is dependent on holiness and clean hearts.

Now, consider this: we are attempting to fight the spirit of bondage in America’s inner cities with an army modeled after the institutional church.  And guess what? 99% of the army is made up of Christians who are unable to walk in their royal priestly callings because of the traditions placed on them by the institutional church system.

So, in effect, we are fighting the spirit of bondage with Christians who are themselves in spiritual bondage. It is no wonder that we continue to suffer defeat after defeat in the inner cities.

Our only hope is to change the way we do church. And do it now.

As startling as it may seem, almost everything that is done in our contemporary churches has no basis in the Bible. As pastors preach from their pulpits about being “biblical” and following the “pure Word of God,” their words betray them. The truth is that precious little that is observed today in contemporary Christianity maps to anything found in the New Testament Church. (Pagan Christianity?, pp. 4)

Smack! The above words slapped my face with their in-your-face gist.

What? I thought. How can this be? Certainly, Viola and Barna must be talking about the snakehandling assembly on the other side of town, and not my church. Especially, not my church.

But soon, I felt a sharp ache in my toes as I continued reading. The pain was excruciating. Viola and Barna were stepping all over my comfort zones. I wanted to put the book down, but a quote floated across my mind:

I trudged onward. I read the authors’ study on the history of church buildings, pulpits, steeples, architecture, pews and balconies. At the end of the second chapter, the authors wrote:

Somehow, we have been taught to feel holier when we are in “the house of God” and have inherited a pathological dependency upon an edifice to carry out our worship to God. At bottom, the church building has taught us badly about what church is and what it does. The building is a denial of the priesthood of all believers. It is a contradiction of the very nature of the ekklesia – which is a countercultural community. (Pagan Christianity?, pp. 42)

Sweat formed under my armpits. My mouth was dry, but I kept at it. I was looking for a chink in their logic, but hundreds of footnotes and pages of bibliography support their findings.

The two authors also chip away at the icons of Protestant order of worship, the sermon, the pastor, Sunday morning dress, the Worship team, tithing, clergy salaries, baptism, the Lord’s Supper, and Christian education. Very few sacred cows are left untouched by this book.

What is the authors’ hope for Pagan Christianity?:

And what’s my opinion of the book? I truly believe that it is an apostolic work which helps to lay a strong foundation for reformation of the American Church. A reformation which will put Jesus back where He belongs as Head of His church.

But hey, don’t just take my word, check it out here. And then buy it.

In February, 2002, I attended my first home church seminar in Oxnard, California. Tony and Felicity Dale were the speakers. The man, sitting next to me, was a disgruntled denominational pastor. As time progressed, he asked, “Why did you come to this meeting?”

“I read some books by Frank Viola,” I said.

He removed his glasses and stared at me. “You know, he’s a radical,” he replied as if the word “radical” was a poison to be avoided at all costs.

I did not reply. But I thought, hmm! Radical – that’s my type of Christian. I better read all of his stuff.

Frank Viola is a Christian author and speaker. He graduated from the University of South Florida (Tampa, Florida) with a degree in social science education. For 15 years, he taught in the public school system.

In 1988, Frank left the institutional church. Since that time, he has been gathering in organic churches in the United States. He has also been active in planting, aiding, and encouraging organic churches since the late 90s. In 2003, he began authoring books full time. On occasion, Frank speaks at house church, simple church, organic church, and emerging church conferences. His public speaking covers a wide range of topics including the all-sufficiency of Jesus Christ, the deepening of the spiritual life, Christian community, church planting, and radical church restoration.

Frank’s books include: Pagan Christianity, Reimagining Church, Bethany, The Untold Story of the New Testament Church, Gathering in Homes, Rethinking the Will of God.

George Barna founded the Barna Research Group (now The Barna Group) in 1984 and helped it become the nation’s leading marketing research firm focused on the intersection of faith and culture. The company has served several hundred parachurch ministries and thousands of Christian churches throughout the country. It has also supplied research to numerous corporations and non-profit organizations, as well as the U.S. Navy and U.S. Army.

To date, Barna has written 39 books, mostly addressing leadership, trends, church health and spiritual development. They include best-sellers such as Revolution, Transforming Children into Spiritual Champions, The Frog in the Kettle, and The Power of Vision. His most recent book is Revolutionary Parenting. His work is frequently cited as an authoritative source by the media. He has been hailed as “the most quoted person in the Christian Church today” and has been named by various media as one of the nation’s most influential Christian leaders.

(To be continued in Part 2)

Vacation With Son and Family

One of the great pleasures in life is hearing a young  voice say, “I want to sit with Grandpa.” And then hearing another young voice say, “No, I want to. “

For many, these sounds are heard frequently, but for Honey and me, not so often, as our grandchildren live in Missouri and Pennsylvania. So, this week is special for us. Our son and his family are visiting from Springfield, MO.

They will be leaving on Thursday; and sadly, Friday will be a quiet day at the Who house.