Sorry to be kinda off topic, but this afternoon, after praying for our nation, I took a very brief nap. I had a very quick dream where I knew that I was supposed to light a fire, but I knew that I was supposed to use the matches that were from the 1800s…possibly late 1800s…possibly in the 1880s…that’s not quite clear, but I am at least sure about the 1800s part, and I was searching in drawers for them. I was wondering if this might have to do with prayer directives from God about how to pray for our nation. Anyone have any ideas? Thanks!

You know how some statements grab your attention, sort of like an ear worm, and won’t let you go, this was one of them. So, I did some research.

In the early 1800’s, most people started fires by rubbing sticks together or by using flint and a piece of metal. But in 1826, John Walker invented the first match which was a wooden stick with a glob of antimony sulfide, potassium chlorate, gum, and starch on one end.  It was easy to ignite. All you had to do was strike it against a brick or something hard, and fire happened.

The disadvantage to Walker’s invention was its horrible smell.

In 1830, a French chemist, Charles Sauria, reformulated Walker’s invention by adding white phosphorous. No longer was smell a problem. Sauria’s matches instantly took over the market.

But the problem with Sauria’s matches was that they were deadly poisonous. Each pack contained enough white phosphorous to kill a person via suicide or murder. Young children suffered deformities by sucking on the match heads. Workers at the match plants came down with horrendous diseases.

So, in the  late 1800’s, a safety match was invented whereby white phosphorous was eliminated and the match head had to be swiped across a strip on the box (or cover) which contained some other chemicals which caused the match to ignite. Today’s match is basically the same as the one invented in the late 1890’s.

Okay, interesting stuff, right? But why would God use matches in pcal7’s dream?

Behold, I am going to send you Elijah the prophet before the coming of the great and terrible day of the Lord. He will restore the hearts of the fathers to their children and the hearts of the children to their fathers, so that I will not come and smite the land with a curse. (Malichi 4:5-6)

Jesus stated that John the Baptist was a type of Elijah. But if you study all the scriptures about what the returning Elijah is supposed to do, you’ll see that John the Baptist did not fulfill all of the destiny proclaimed by Jesus and Malichi 4? So, we are still waiting for more Elijah’s to arrive on the scene.

Now, if you read the scriptures from Elijah’s arrival (1 Kings 17:1) through his departure (2 Kings 2), you will discover that Elijah had authority and miraculous power from God. And because of this, he was a fearless warrior for the Lord.

But also, Elijah was a maverick, not under any religious system and not accountable to the temple’s priesthood hierarchy of his day. Just like the matches before 1890, Elijah was a self-contained agent of fire. Explosive and dangerous.

Lord, send Your Elijahs to America. Send us Your agents of fire who will not bow down to the religious hierarchies of our day. Send them in Jesus name we pray.

If An Eight-Year Old Weeps Over Abortion, What’s Our Problem? 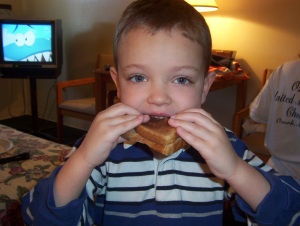 The following was written by my son, Scott, on a comment to an article yesterday:

Disclaimer: I am larrywho’s son, Scott, who lives in Missouri. this is my first wordpress post so hopefully I don’t mess up the links.

I am pro-life but am not overtly vocal about it…but the Lord hit me with a ton of bricks yesterday. I was picking up my 3rd grade son yesterday from school while listening to talk radio. The show was making the pro-life argument and discussing some of the gruesome details of abortion. I debated whether I would change the station once my son got in the car…I decided not to change the station.

My son knew the basic definition of abortion because he asked me about it a couple of weeks ago…the result of a curious mind that heard the word ‘abortion’ at school. But beyond that discussion, I had not given him further details about abortion. Trying to shelter him from it, I guess.

When my son got in the car, they played an audio clip of a nurse describing her experience with an aborted infant that somehow survived the process…then was taken to a room to die. She described how she held and tried to comfort the infant in its final 45 minutes of life. My son heard the entire testimony. I said nothing during the clip. I decided to let him listen and react to what he heard.

I looked back at my son after the testimony of this nurse…the tears welling up until they poured forth from his eyes. A great father/son discussion followed.

Bottom line: Even a 3rd grader, who does not understand a lot things about this world, can see with absolute clarity how detestable and horrible abortion is.

Lord, thank you for hitting me with that ton of bricks…I needed it.

When I read this, I cried. Half of my tears came from the pride I felt about my grandson’s reaction to abortion. But sadly, the other half came because of the shame that I felt about my lack of tears over abortion.