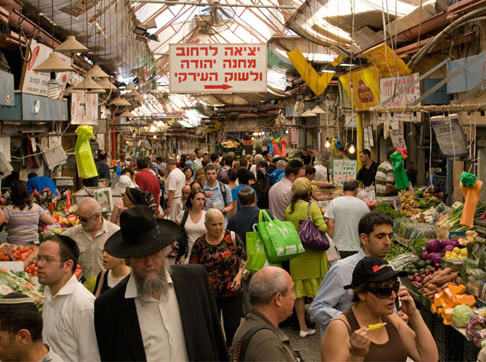 The word shalom comes from Him alone, The Prince of Peace (Shalom) The One who has made us one together in Himself. May HE be blessed and glorified and revealed in His people. Blessings to you with love, in this, the last week of the year, according to the Jewish calendar.

That’s right. The shofarim (ram’s horns) are sounding their deep calling unto deep throughout the city of Jerusalem anyway, and possibly the whole land.

Next Sunday night marks the beginning of the Jewish new year ‫תשע”ז    (tav, shin, ayin, zayin) or 5,777.  The main scriptures referring directly to the feast of trumpets (Rosh h’shana) are found in Leviticus 23:23-25 and Numbers 29:1.  They don’t say much except that it is to be a high holiday and the ram’s horns are to be blown.  Rosh h’shana means literally “the head of the year” and it has become the “new year” in spite of the fact that Moses said that Passover would mark the beginning of the year for us.  Since I have discussed this in depth over the years I will NOT go into it now, but will share with you that it is the beginning of the cycle of the Fall Feasts: Rosh h’shana, Yom Kippur (the day of awe…of confession, repentance and fasting), and finally the amazingly joyous week long feast of Sukkot (feast of tabernacles).  This is a busy busy season over here.

The shofar sounds daily now as people practice their blowing skills during morning prayers all around the city and in every synagogue.  Apples and honey, almonds and raisins − the traditional greeting for the “sweet year” are everywhere filling the air with sweet aromas and tastes.  The grapes and pomegranates, dates and persimmons shine colorfully out of the stalls at the shuk and people scurry everywhere buying gifts to give to others, preparing meals for friends, family and the poor and needy. All are preparing to gather together… and preparing hearts and homes.  It IS a special time.

But in these days that show every sign that we have indeed entered into the path of God’s judgments, time itself seems to me to have speeded way up.  The air is mixed with the smoke of the fires burning all around us in the wars and upheavals on every one of our borders and extending throughout the entire world.  Is it just me or is there a tension which seems to be at a deeper level everywhere. The sounding of a warning shofar, calling us deeper into His Presence, to be hidden in The Rock until the fury passes by, but I have a strong sense that once it passes things will never be the same again.  Perhaps I am a pessimist and this is all subjective.  I don’t speak as a prophet or leader, just a sheep with a profound sense of urgency.

Perhaps part of it is reinforced by a flurry of strange events that have happened to me since our upstairs neighbor miraculously moved out JUST before my husband’s return from Alaska. Then our family moved in with us, creating quite a bit of noise that would have really had us in trouble, had she still been there.

Some of you might recall me asking for prayer for Dalia, a demon possessed woman at the shuk whom I had befriended and was praying much for.  She has been very friendly to me for several years and I longed to share Him with her but felt a caution to wait for His timing on praying for her.  Suddenly, with no warning, she has begun cursing me and my Yeshua.  She sends knives of hatred through me when we see each other, which is almost daily, but how did she know?  I never told her.  It took me so much by surprise.  It also took me by surprise when an old patient from the doctor’s office where I work came in and said, “I have something that you HAVE to listen to.”

She put earphones in my ear.  The music played: Jesus shot an arrow of love into my heart and changed me or something like that.  I looked up, startled, and said, “How did you know?”

“Oh, you told me years ago and I never forgot,” she said beaming at me.

Then I remembered, some 18 years ago she was going through a terrible time and my boss was trying to keep her out of a mental hospital.  I shared with her then, but have not seen her since more than a few times.  She remembered.  It is curious to me: why NOW?

And along with this, at the same time, persecutions against the believers has picked up.  I will not detail this at this point.

Yes, there is more.

With all that is going on in my family I have had NO time to write, and don’t now (it is midnight and I really SHOULD be in bed) but I can not let the new year run in without sharing.

All of the personal news has been stacking up as well: just too much!

Thank you SO much for your prayers!

My husband’s trip to Alaska with our Grandson for his bar mitzvah gift and our son in law being with them, was excellent, a real blessing. I can only trust Him that He is working much in each of them.  My husband’s health did not suffer, and my time on my own was excellent, a time that I needed to gain strength, peace and settling in Him.

Three days after my husband arrived home, our younger, very pregnant daughter with her husband and two and a half year old daughter arrived home after 4 and half years in America. (TALK ABOUT HAPPY GRANDPARENTS!!)

That is nearly 3 weeks ago now.  They are still going through the bureaucratic hoops of being fully reinstated into the system, but Yitzhak is a sabra (born here) and that makes him so much more able to maneuver the system, so we are hopeful that they won’t get too bogged down, even though the country literally shuts down for the 3 weeks of these high holidays.  It is urgent that our daughter and our Granddaughter Maya be fully established into the health care system before the new baby arrives. It would be REALLY GOOD if they had their own apartment, at least with beds and appliances, before the baby comes as well, but perhaps that is selfish of me.  Yet I think it is better for them.

We thought that perhaps the apartment above us that Valarie so recently vacated was for them, but the landlady is asking far too much rent and it is really a dump.  I had asked some of you to pray that they would get it IF it was His will, but I had a check in my spirit immediately that it wasn’t, so I wasn’t terribly disappointed.

On Friday they found an apartment in the northern Jerusalem neighborhood of Pisgat Ze’ev.  Those of you who follow our news may have heard of this neighborhood, one that the UN says is illegal. It is on the seam line and so has seen a fair amount of violence, being in close proximity with some large Arab cities.  (At the end of this letter I enclosed a small description)

The 5-room apartment is half the price of our 3-room apartment and is new and lovely, according to Yitzhak, who saw it.  It is being renovated and won’t be ready for two more weeks and only then will they know if they can get it, so I again ask for prayer that IF IT IS HIS WILL FOR THEM THEY WILL GET IT.  It is at exactly the other end of the train line that runs past our house, so I could just take the train to help her.  In times of unrest, it does go through many stone throwing areas and they would be near to these places.

On the bright side, it would be good for them to be in a young community like this one and not too near to his ultra religious family.  It is affordable and pretty.  Thank you for praying for His will.  AND I HAVE A SECRET:  I have seen that, yes, The Lord is sending them witnesses here, and yes, I have peace that HE will draw them with cords of mercy.

Our older daughter’s family as well is going through a shuffling.  Hopefully I can share about that soon, but it all says to me that The Lord is moving quickly, and He WILL bring His people home to the land that He promised.

Comfortable? Easy?  NO!  Faithful?  OH YES! NOT ONE WORD WILL FALL TO THE GROUND.

Oh my, nearly 1a.m. and I must be up in 4 hours. This letter comes to you with love from the center of “it all.” I am PRAYING that I can get more time to share, particularly with these wonderful fall feasts running toward us.  May The Lord of grace and mercy fill you with all joy and hope in believing and refresh us with His own Self for His glory.

On the way to Neve Yaakov, you’ll pass through Pisgat Ze’ev, the largest neighborhood in Jerusalem. With over 50,000 residents, Pisgat Ze’ev is a relatively new and popular destination for families and young couples looking to escape the skyrocketing property prices elsewhere in Jerusalem. But with a new development in progress, Pisgat Ze’ev may well become the next hot location for real estate hunters in Jerusalem.

Named for the early 20th century Zionist activist Ze’ev Jabotinsky, Pisgat Ze’ev was founded in 1982. The neighborhood was established to create a link between the Jerusalem center and the outlying neighborhood of Neve Yaakov, which was isolated at the time. Pisgat Ze’ev is located near several Arab villages and the neighborhood of Shuafat. Perhaps due to the ideology of its namesake, many of the central streets in Pisgat Ze’ev are named for Israeli army units circa the 1948 and 1967 wars. In ancient times, the region where Pisgat Ze’ev is now located was once a major source of oil and wine for use in the Temple in Jerusalem.

This neighborhood is now home to many Jewish families with children, and consequently has many kindergartens, elementary schools and a few high schools. The population is a mix of religious and secular Jews, with a significant number of synagogues throughout the neighborhood. A small but increasing number of Arabs have been moving to Pisgat Ze’ev, as well.

In 2009, a luxury building project in Pisgat Ze’ev was approved that has already attracted the interest of several buyers. The project has also attracted controversy, since Pisgat Ze’ev, despite being part of metro Jerusalem, lies beyond the 1967 Green Line and is classified internationally as a settlement. But the popularity of the project indicates an ongoing phenomenon in Jerusalem: local buyers are looking to move away from the city center, going instead where prices are more affordable.