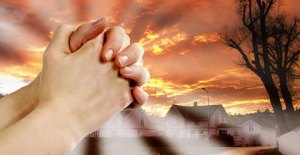 The female pastor walked to the pulpit and began the eulogy for my high school friend. I have no idea what she said because the Lord chose this moment to speak to me.

The Holy Spirit whispered to my heart: “My church is a bunch of nice losers. They lay their hands on the sick and pray for them, but when they die, they aren’t mad at all. They don’t check themselves out to see what happened or what they may have done wrong with their prayers and actions. They accept defeats and don’t think anymore about them.

“Now, Major League baseball teams are all filled with good players. Each player has to be one of the best in the world to make it to the Major Leagues. Losing teams have good players on their rosters, too. But after a while, losing teams’ players don’t mind losing because after all, they still receive their Major League paychecks and bonuses.

“I want My church to hate losing!”

(Excerpt from The Hunt for Larry Who by Larry Nevenhoven, ©2014, Amazon eBook)

Lord, help American believers to fear You so that we will hate evil in all of its forms, including sickness and demonic oppression, and help us to rid ourselves of our lukewarm Laodicean attitudes. (Based on Proverbs 8:13 and Revelation 3:15)

Join with me on Tuesdays to fast and pray for new revelations on healing and deliverance for Americans NOW.