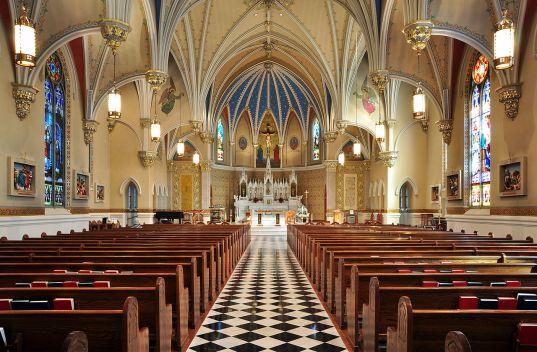 The Easter Sunday crowd packed the seats in the school gymnasium where the young Four Square Church held its service. The worship team led off with fantastic worship music. One song, Hungry, captured the assembly’s attention, especially its chorus: “So, I wait for you. So, I wait for you.”

The worship team finished as the young, good-looking pastor walked over to the microphone. He clapped his hands in appreciation for the worship team’s efforts. He turned to the assembly, winking an eye at everyone.

“Maybe by now,” he said, “you’ve realized that we’re a little different from all of the other churches in the city…”

The pastor continued on, but I did not hear a single word he said for the next five minutes or so. I was in a different zone, one where the Holy Spirit had my full attention.

“No, this church is not any different than the others,” said the Holy Spirit. “Not one bit different than any of the other churches in the city. If you were, right now, attending a Catholic Church or a Baptist Church or a Pentecostal one or any other church in the city, it would be no different than this one. You would still be sitting here like a bump on a log listening to a head frog croak at you. Your only input into this service will be the check you toss into the offering plate when it is passed under your nose. Is this the church Jesus hung on the cross and died for?”

Afterward, I told Carol about my experience. She sighed and stared at me.

“You’re sure different, aren’t you?” she said. “I really like this church and now this happens.”

Just so you know, the Holy Spirit was not referring to doctrines at the various churches. If that were the case, each would be different, but instead, He was referring to the wineskin, the particular format, which all traditional churches follow in their churches. They are all basically the same, in that there are definite separations between the active few −the clergy −and the passive many −the laity −who sit in the seats and pay for the privilege to do so.

I hurried down West Broad Street in my Ford pickup truck, carrying Toyota parts to a mechanic who needed them right away. As I drove along, I had a graphic vision.

Do you remember iron lungs, which polio sufferers used during the 1950’s? They looked like large cylindrical metal tubes and encased polio victims, helping them to breathe via a pressurized airflow system. The bulky machines filled entire hospital wards during the height of the polio epidemics.

In my vision, the American church system was terminally ill. As a last ditch effort to save its life, the whole church system laid in a white iron lung, gasping for its every breath. The long power cord, attached to the rear of the unit, meandered itself through other electrical cords to a unique power source: money. The life support system was plugged into bags and bags of money.

I stared at the strange sight and then a thundering voice interrupted my thoughts.

“Pull the plug!” proclaimed the voice.

Carol and I prayed about my vision that night. We felt we needed to leave the traditional church system.

Our decision to not attend churches sounds easy now, but at the time, it seemed like we were the only people in the whole nation walking away from churches. A little research on the Internet revealed hundreds of thousands of Americans had done the same thing over the previous years.

Still it was not easy to break our church attending habits. We were used to sitting in pews on Sunday mornings, Sunday evenings, Wednesday evenings, and whenever the church doors opened.

A well-meaning pastor once took me aside and gave one of those lectures no one likes to hear.

“Larry, you need stability in your life and for your marriage,” he said, shaking his head at our nomadic life. “No one will ever take your prophetic ministry seriously if you don’t settle down. You need to settle in a city and find a good church to park yourself so others will take you more seriously. Please, seek the Lord on this advice.”

This vision blew any thoughts about obeying his words out of the water.

(The above excerpts are from my memoir, The Hunt for Larry Who, an Amazon eBook.)

If my two experiences are really from the Lord, what is His eternal purpose in all of this?