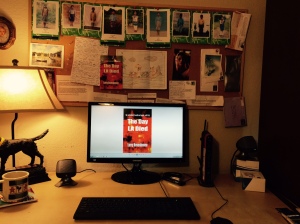 From the articles I have read, most of today’s authors follow fairly rigid disciplines and begin writing at a set hour. Each has a certain amount of words they hope to write for the day. The number of words falls generally in the 1000 to 2000 words range.

Since, I did not know any better when the Lord told me to write, I set my early goals at 1200 words per day. This worked out to about four or five pages of new material per day.

Yet, I remember many, many days when I would bang away on the computer for a couple of hours and maybe had 650 words done, but then realized something was missing. Sadly, that something was the presence of the Holy Spirit. I would then end up deleting every word I wrote.

It  would be great to pretend that I am a quick learner, but the truth is that it took months and months for me to learn this process for myself. I now sit down and if the presence of the Holy Spirit isn’t there, I don’t write.

Just so you know, I do not claim to write straight from the mouth of the Lord…oh I wish I did! But I do claim that His presence needs to be there to comfort and encourage me as I write.

Okay, a few days ago, I came up with what I think was an inspired opening for the next Luke and Cat Stoner novel. And almost 700 words later, the book was on its way. I saw the characters coming to life, where they lived, and a little bit of what would happen in the early stages. It was so exciting that I now fall asleep thinking about the story.

So, the other day, I sought the presence of the Lord and this is my latest writing:

Yep, we’re talking about what looks like another major detour in my publishing career. What’s new, huh?

Who ever thought that I would end up attempting to start a Noontime Prayer Meeting For Geezers?